My rating: A for Awesome!

One of the casts of this movie that I liked the most is Ewan McGregor as Elmont, maybe because he is Princess Isabelle’s best friend, her rescuer at all times and performs his duty to the kingdom, his men, and to the king very well. Truly, he’s a knight and shining armor. Sadly, Isabelle fell for the peasant-turned-hero Jack. If I was her, I’d choose Elmont.  Anyways, too much of my fantasy, let me move on now to my main point.

If you’ll ask me where do I see God in this movie? My answer is: I saw Him with Jack’s king, Mr. Ian McShane as king Brahmwell. Here are my three awesome reasons why…

First, king Brahmwell sacrificed the life of her daughter for the sake of his kingdom. It was hard for a father to let her only child die with that giant tree or whatever you call that thing when he commanded his men to cut it before any giant could find their way down first. 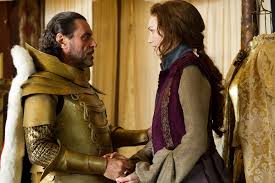 My King did the same thing for me two thousand years ago when He gave His son, Jesus Christ to save me before death could find its way with me.

For God so loved the world that He gave His one and only begotten son, and whoever believes in Him shall not perish but will have eternal life. – John 3: 16

Second, king Brahmwell did the first move. That’s a real leader! After one giant fell in their kingdom, the king held an ax and did the first cut. He takes the initiative; he commands and then he acts.

My King is the one who always takes the lead. He’s in charge with everything. He’s a God who does mighty acts, who performs signs and wonders, and who created everything from His own hands. He’s not a God who just commands and let His people works; He’s a God who works with His people.

So God led the people around by the desert road toward the Red Sea. The Israelites went up out of Egypt ready for battle. Moses took the bones of Joseph with him because Joseph had made the Israelites swear an oath. He had said, “God will surely come to your aid, and then you must carry my bones up with you from this place.”- Exodus 13:18-19

Lastly, king Brahmwell never leaves his men behind. That scene when the king was fighting already side by side with Elmont in defending the gates of their kingdom, I really feel like crying as he fought with his men. He holds the rope with all his strength. He fell a lot of times and stand up again to fight.

My King never leaves His people throughout history. In the beginning there was God and even until now there is God, for God is omnipresent. He fought for and with His people. He never fell, for He always holds His people whenever they fall; He gives the strength for His men to continue the battle that was already won by His son, Jesus Christ.

Be strong and courageous. Do not be afraid or terrified because of them, for the Lord your God goes with you; he will never leave you nor forsake you. – Deuteronomy 31:6

See how great my King is? He’s far greater than king Brahmwell of Jack the giant slayer. After all, my King, God is the King of all kings.